Everest and the Khumbu

Our ascent of Kala Pattar overlooking Everest and the Khumbu began at Gorak Shep, the site of the original base camp. Although we attained the summit in deep mist, this glorious view of Everest, the upper Khumbu and the ice fall just above the current base camp, appeared on our descent.

Mount Everest was named in 1865 by the Royal Geographical Society after a surveyor who had determined it to be the highest mountain in the world. It has a confusion of local names,  not surprising since the international border runs across the summit point. The modern Nepalese name is Sagarmatha, and the Tibetan is Chomolungma 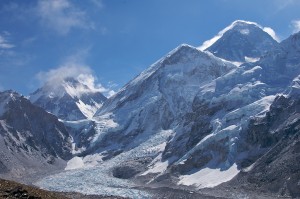 Interestingly, Everest is the highest mountain above sea level, but there are 4 peaks that are further from the centre of the Earth (because of the equatorial bulge) including Kilimanjaro in Tanzania and Cotopaxi in Ecuador on who’s slopes I stood in 2007.