Robert Henry Cave (Born 1953 in Leicester, the youngest of three brothers) I was brought up in the North Evington area of Leicester and educated at Wyggeston Boys school and University College London. After graduating in Microbiology and later in Virology at Birmingham I took up a career as a Biomedical Scientist at the Public Health Laboratory Service in Nottingham, eventually managing the Virology Serology and Molecular diagnostic service at the Queens Medical Centre of Nottingham University Hospitals NHS Trust.

Influenced by TV programmes such as the ‘Life’ series with David Attenborough, ‘Blue Planet’ and ‘Planet Earth’, ‘Big Cat Diary’ and the written exploits of Shackleton, Scott and others, in 2006 I took up an interest in travel and photography that has now taken me to all parts of the globe.

In 2011 I was a runner up at the BBC Wildlife Magazine/ ‘Wildlife Photographer of the Year’ awards receiving my plaque at a lavish ceremony under the Diplodocus at the Natural History Museum in front of many wildlife celebrities for a photograph of a Minke Whale I captured in the Sea of Cortez in Mexico.

My interest in photography grew firstly in my teenage years during the early 1970’s, when I owned a Praktica SLR followed by Nikkormat and Olympus OM10 film cameras, carrying the latter up many of the Lakeland fells and Scottish & Welsh Mountains. Never quite mastering the subtleties of either landscape photography or darkroom techniques, for a couple of decades my interest waned. The advance of digital photography, and associated software and a newfound desire to travel led to my taking up the hobby once more.

Realising that time was getting short and after surrendering significant amounts of my annual leave to the oblivion of workaholism, I chose to book a trip to Antarctica. I equipped myself with Nikon D70 DSLR plus what was a rather poor standard zoom, but took the good decision to purchase a second hand Nikkor 70 -200 VR from Grays of Westminster. After further trips to Ecuador & the Galapagos and Madagascar it was becoming obvious that upgrades were necessary and after dabbling with Sigma lenses, my bag is now wholly Nikon.

My first entry into digital processing was with JPegs using Photoshop Elements 6 on a Windows laptop PC. Again, jealous of what I was seeing others achieve, in 2008 I purchased an iMac (24″) with Aperture, and with my new Nikon D300 switched to raw only. As of 2015, I am still shooting with my trusty, 7  year oldNikon D3S but have recently upgraded to the D500. Apple, regrettably have abandoned Aperture for inferior things so a move to Adobe Lightroom CC (and Photoshop CC) has been necessary, software which I know well, but up till now has not been my main image adjustment application.

My list of trips is now growing long, but in November 2009, I was fortunate to make the trip of my life  to the Weddell Sea and Snow Hill Island on board the Kapitan Khlebnikov. This Russian Ice-breaker became trapped in the ice for a while, but at least the weather relented and we were able to make the 20km helicopter flight to a point 2km from an Emperor Penguin rookery. A BBC crew, also on board,  filmed some of the scenes for the series ‘Frozen Planet’.

There have been many other unforgettable experiences including:

But the experiences of sleeping under canvas and journeying out before dawn in a Land Cruiser to the savannah of the Masai Mara with its resplendent wildlife, or the excitement of a trip to the polar region on board an expedition ship and making landings in zodiac boats are my favourite and something I plan to do many times in the years ahead. 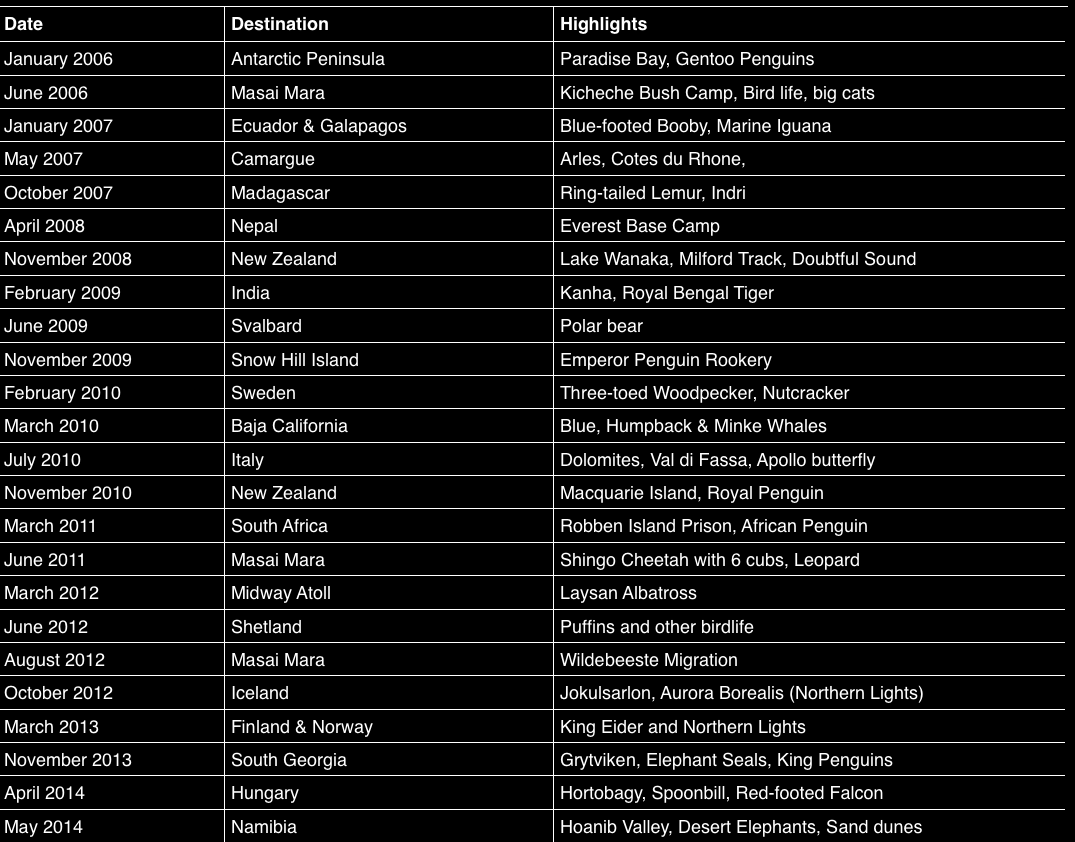